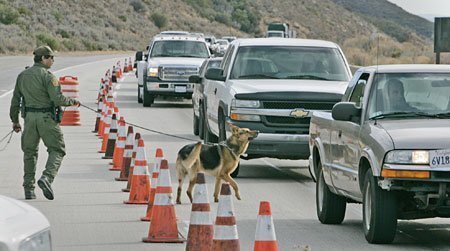 The small van, packed with 10 pounds of California-grown, California-certified cannabis flower, left its home base in Imperial County and headed north.

The delivery was labeled and packaged to be sold in a state-licensed dispensary in the town of Needles.

It didn’t get far.

The van was stopped at a Border Patrol highway checkpoint some 20 miles from the actual international border, and the entire load, worth $15,000 in wholesale value, was seized by federal agents, according to the distributor, Movocan.

Such is the reality of operating a state-licensed cannabis business in the southernmost reaches of California.

The tension between state and federal stances over marijuana isn’t new, but it plays out uniquely in San Diego and Imperial counties because of the proximity of the U.S.-Mexico border and a legal authority that allows Border Patrol checkpoints to extend as far as 100 miles north of the international line.

With marijuana remaining illegal under federal law, the potential for seizure or even arrest at these checkpoints has caused many state-certified cannabis businesses to step lightly in the region — particularly in Imperial County.

For now, the risk is too great for Infinite Chemical Analysis Lab, one of the region’s few state-certified testing labs. The San Diego-based facility has decided not to make the sampling trips to Imperial County anymore, a move that limits the ability for other state-licensed businesses to sell and distribute from there.

“It’s like they’ve trapped a corner of the state,” Josh Swider, the lab’s co-founder and CEO, said of the Border Patrol.

There are at any time as many as nine interior checkpoints positioned as far as 63 miles from the California-Mexico border. The most well known and well traveled are westbound Interstate 8 in Pine Valley, northbound Interstate 5 in San Clemente and northbound Interstate 15 near Temecula, along with outposts on more rural highways near Campo, Ocotillo, the Salton Sea and Glamis.

The Border Patrol has long used the checkpoints as an additional layer of enforcement to stop northbound unauthorized immigrants who may have made it past the U.S.-Mexico border undetected.

The San Diego region is also one of the busiest in terms of cross-border drug trafficking, and these checkpoints are seen as a last line of defense before the illicit loads are funneled to major distribution points north. Large seizures of methamphetamine, heroin, fentanyl and cocaine, often found hidden in secret compartments or mixed within commercial goods, are common.

The checkpoints have been the subject of intense debate over how far the authority to inspect extends to U.S. citizens, especially those who live in rural areas and must cross through them daily to work, go to school or run errands.

But despite several legal challenges over the years, the courts have consistently concluded that the law remains on the government’s side.

Since California voters legalized adult-use, recreational marijuana use in 2016, with sales beginning in 2018, the federal government has been clear in its official stance.

“Cannabis, regardless of origin, is classified federally as a Schedule I narcotic and is illegal and subject to forfeiture when traversing through a Border Patrol checkpoint,” a San Diego Border Patrol spokesman reiterated recently.

In reality, a large amount of state-legal product is being quietly allowed through checkpoints, according to licensed cannabis operators in the region.

These shipments look nothing like the clandestine smuggling loads Border Patrol otherwise encounters.

The state requires licensed distributors to follow strict protocol when transporting cannabis. For instance, cannabis must be locked in a cage or container secured to the vehicle and not be visible from the exterior. The vehicle should have a security system. And the product should be clearly labeled and packaged.

Distributors are quick to have their driver’s licenses, state permits and shipping manifests on hand when approaching a checkpoint. It is then up to agents after inspection to determine whether the load appears legitimate.

The agents often ultimately send it through, said Breton Peace, an owner and legal counsel for March and Ash, which has dispensaries in the cities of San Diego, Vista and Imperial.

“The agents, they are just people too, they live in California, they know the situation,” Peace said.

Distributors in San Diego say the route north through the Interstate 5 and Interstate 15 checkpoints is usually hassle-free. Often the posts aren’t open. When they are, vendors are inspected and frequently allowed to pass, they say.

“We do it every day,” said George Sadler, co-founder of Platinum Vape, a San Diego manufacturer and distributor of cannabis vape pens. “Eight vans, to NorCal, a few times a week to L.A. and the desert. We don’t ever have a problem.”

Agent discretion plays a large role. Still, even shipments with everything in order can be seized.

That makes it hard for state-licensed operators to predict whether cannabis will be cleared for passage, turning each trip through a checkpoint into a gamble.

Movocan, a state-licensed distribution business and retail dispensary in Imperial County, has experienced the gamut trying to move product outside the region, according to Angel Fernandez, the company’s director.

Sometime last year, one Movocan delivery driver encountered a checkpoint on his way to Palm Springs. A drug-sniffing dog drew attention to his vehicle as he idled in line. When questioned by an agent, the driver showed him the paperwork.

“The driver was upfront with [the agent] and [the agent] waved him through,” said Fernandez. “He didn’t even check the drugs.”

Then in November, a driver was headed to the Needles dispensary when an agent at another checkpoint seized the whole $15,000 shipment.

“It’s been mixed signals,” Fernandez said, “a lack of clarity.”

Some distribution companies based elsewhere in the state have questioned if the risk of doing business in Imperial County is worthwhile, Fernandez said. It’s easy to drive shipments into Imperial County — with no checkpoints checking eastbound or southbound traffic — but leaving with cannabis can be problematic.

Many of the vendors come from Los Angeles, and they drop down to Imperial County, unload some product, then continue to San Diego via Interstate 8 west. That’s where many distributors seem to run into trouble, according to businesses.

Platinum Vape had $60,000 of its product seized there in November when a distributor was driving the loop route.

So Platinum now does what many distributors do: It loads up just what it needs to deliver to Imperial County so it can head back home to San Diego with an empty van. It uses different routes to deliver elsewhere in the state.

“We have to be strategic,” said Sadler.

Hemp, a variety of the cannabis plant that has nonintoxicating effects, has also come under scrutiny at the checkpoints, even though it is legally regulated under the federal Farm Bill.

The raw material and many of the CBD products manufactured from the plant can be difficult to distinguish from marijuana. That can be a problem for the expanding hemp industry in Imperial County, where traditional crops have been turning over to meet the high demand for CBD.

“It’s been a big roadblock,” said Mark Samuels, co-founder and vice president of product and creative for Primordia, an Imperial Valley hemp cultivator.

What distinguishes hemp from marijuana under state and federal law is the level of THC, with hemp containing 0.03% or less of the psychoactive ingredient.

Growers are required to test hemp crops for THC levels under California law. At the same time, they often order a battery of other safety tests looking for pesticides, heavy metals and toxins.

In April, a technician from Infinite Chemical Analysis Lab in San Diego drove to Imperial County, took samples from Primordia’s hemp crops and was driving back when he hit the I-8 checkpoint. Despite having the proper paperwork, the samples of hemp in labeled bags were seized and the driver was threatened with arrest, according to lab CEO Swider.

A similar lengthy investigation occurred again a month later at the same checkpoint, although the driver was eventually allowed to continue on with the hemp samples.

Proving on the spot that the material is hemp can be difficult, since checkpoints don’t have the capability to test such minuscule THC levels on-site, Border Patrol officials confirmed.

Recently, hemp distributors have been told to notify checkpoints a few hours in advance of an approaching load as a way to avoid unnecessary confusion and confrontation.

That has helped calm some in the hemp industry, but Swider said the Border Patrol also issued him a stern warning: If sampling technicians come through with cannabis, it would be seized and drivers potentially arrested.

The admonition has caused the lab to cut off all cannabis sampling to Imperial County.

Border Patrol officials point to the checkpoints as part of their larger mission — protecting the American public from harmful threats.

But Supervisory Agent Jeff Stephenson also acknowledged the legal tension agents are having to navigate in California.

“It’s a complicated environment in the state and we have to make the best decisions we can at the time,” he said.

Certainly not all of the cannabis coming through checkpoints is state certified. California has a booming black market of homegrown and Mexican-cultivated marijuana being sold in illicit storefronts that don’t have to pay the high cost of meeting state and local regulations. And there’s always the chance that an illicit player is posing as a state-legal one.

The Border Patrol would not say how much marijuana — illicit or state-certified — has been seized at Southern California checkpoints in recent years.

In fact, cannabis entrepreneurs like Peace at March and Ash want the federal government involved in regulating the industry, distinguishing the legal actors from the illegal.

“We don’t want the U.S. authorities to stop checking everything coming through,” Peace said. “The line between certain legal players and illegal operators is not as bright as the public may understand. The legal industry wants law enforcement to find and deal with the illegal product flooding the marketplace.”

Cannabis industry leaders in Southern California have tried to make inroads with federal and state authorities to come up with a uniform protocol for moving state-legal product through checkpoints. And while they’ve gotten some sympathetic responses, they are ultimately told that nothing can be done on an official level until the issue is handled in Washington, D.C.

The state Bureau of Cannabis Control said as much to Swider in a letter sent after two recent checkpoint incidents.

“The Bureau understands that this creates challenges for those legally conducting commercial cannabis activity pursuant to state law. However, the Bureau does not have the authority to change the federal law or border patrol checkpoint operations to allow licensees to transport cannabis goods through these checkpoints,” it stated.

The bureau declined to speak with the Union-Tribune about the issue.

“We pay a lot of money to have this license, we shouldn’t be having these problems,” Swider said. “All we hear is, ‘It’s a federal problem, not our problem. We can’t help you.’”

Still, Peace said the Border Patrol is responding to the issue with more nuance than he’d expected.

“The agents, I believe, are doing a heck of a job on a pragmatic level, living under this layer of federal and state laws that the powers that be don’t want to address.”