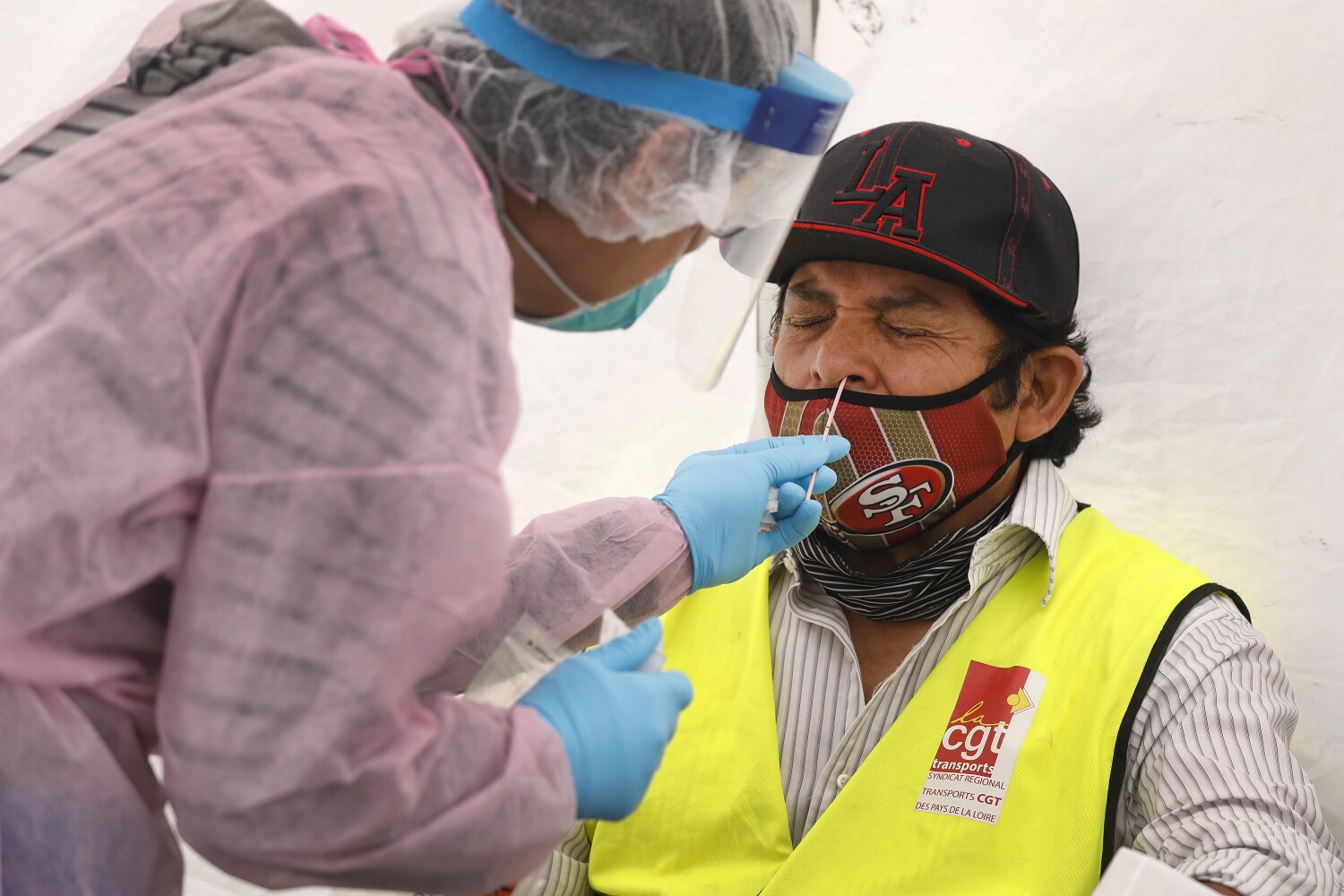 The total number of COVID-19 tests conducted in Orange County was mistakenly inflated for more than a month beginning in late April in data released to the public, an error that may have painted a rosier picture of the pandemic than the reality in the region.

For roughly five weeks, county staff incorrectly added 30,000 serology tests to its “cumulative tests to date” figure, which made it appear that more testing for the virus was happening than was the case.

The cumulative testing figure reported by the county is supposed to be a count of how many diagnostic tests — which detect whether someone was infected with the virus at the moment of testing — were conducted countywide, Dr. Clayton Chau, director of the Orange County Health Care Agency and the county’s interim health officer, said during a media briefing Thursday.

Serology tests, which officials say are not meant to be included in the cumulative testing figure, determine whether the body has mounted an immune response to the virus in recent weeks or months. Those tests are not reliable in determining whether someone is sick at the moment of testing, experts say.

“I would like to sincerely apologize for any confusion this matter has caused for the community. In the future,” Chau said, he and his team will “be more transparent with respect to the data that informs policy and personal health decisions of our residents.”

The error first occurred April 28 when health services staff downloaded lab results from the California Reportable Disease Information Exchange database and mistakenly captured serology tests as part of the “all COVID tests” report. That information was then published on the county’s website, according to the Health Care Agency.

The mistake continued undetected until June 3, when county leadership became aware of the issue and immediately stopped including serology tests in the testing figure. But it took officials until June 26 to remove the incorrect data from the county’s website, Chau said.

He said the county was preparing to correct the information when it published a new version of its website, but glitches in the system and officials’ attention on reopening the county delayed the launch of the site, so the inaccurate data was available to the public for several weeks.

Members of the county Board of Supervisors were not made aware of the inaccuracy until the information was published by the Orange County Register this week, board Chairwoman Michelle Steel said.

“I immediately asked Dr. Chau to provide an explanation of what happened and how it affects our numbers,” Steel said. “I have also asked Dr. Chau to begin reporting antibody testing separately on our website so that all the data will be clear and trackable to us and to [the] public.”

Chau said the county never counted positive serology tests as positive COVID-19 cases, which would have incorrectly inflated the number of cases in the county.

He also contends that the county never used the incorrect testing figure to determine its positivity rate, or the rate at which coronavirus test results were coming back positive. The positivity rate is a way health officials can measure whether case numbers are increasing because of more testing or because there’s more disease spreading within the community.

Combining the number of serology and diagnostic tests could make the proportion of positive tests seem smaller, and the positivity rate less severe, to someone looking at the data if officials don’t specify the number of each test, said Dr. Shruti Gohil, associate medical director of epidemiology and infection prevention at UC Irvine.

“You can’t lump both of these tests together when you’re trying to determine how many new cases we have,” she said. “If you’re trying to understand countywide how many people have ever had coronavirus ever, then you could lump the two together.”

Officials contend the county’s positivity rate, which is one of the metrics the state used to determine whether Orange County could reopen additional sectors of its economy in mid-May, was never affected by the inaccurate figure.

The county’s positivity rate was listed as 7.95% over a seven-day period in mid-May, according to the figures published by the state. As of Thursday, the county had a case rate of 152.5 per 100,000 residents and a positive test rate of 12%, according to health officials.

The state has set a desired standard average of 25 positive cases per 100,000 over a 14-day period and a seven-day average positive test rate of 8%.

“I can assure you in terms of the positivity rate it was always downloaded from the state and we did not self-calculate it so the number would still be the same,” Chau said. “It would not have affected decision-making.”

The news of the inaccurate data came to light as county officials grapple with a troubling surge in coronavirus cases and hospitalizations, which prompted the state this week to scale back reopening efforts in the region. The county has the third-highest number of coronavirus cases among the state’s 58 counties and the fourth most deaths, according to Los Angeles Times data.

On Thursday, county health officials reported 652 additional coronavirus cases and nine more deaths. The numbers bring the total case count in the county to 15,065 and the death toll to 354. Officials also reported that 556 people were being hospitalized for the virus with 193 in intensive care.

On Wednesday, county officials announced the closure of bars, pubs, breweries and brewpubs that do not offer dine-in meals. Less than two hours after the county issued its new order, Gov. Gavin Newsom announced that Orange County — along with 18 other counties — must immediately close bars and cease indoor operations at restaurants, wineries and tasting rooms, movie theaters, family entertainment centers, zoos, museums and card rooms.

The new rules will remain in place for at least three weeks, Newsom said.

“Because of this sudden order, these businesses will lose so much and this will likely have larger negative consequences on the California economy than we initially predicted,” Steel, the supervisor, said Thursday, urging residents to practice good hand hygiene and wear face coverings in public.

“We don’t have to sacrifice public health for the economy or vice versa when we can focus on ensuring both are protected.”