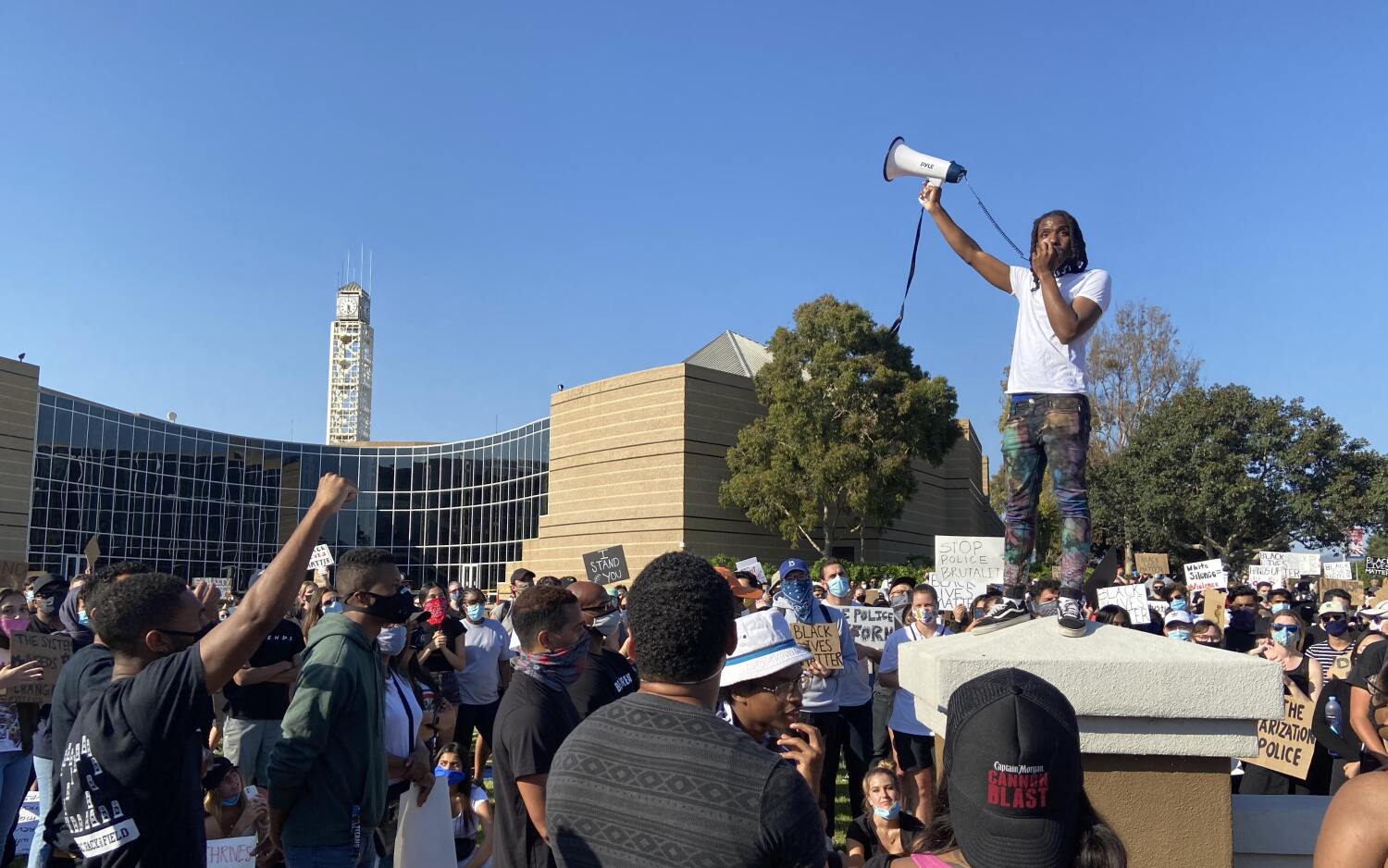 Peaceful protests continue to spread across the region, drawing a diverse array of people to some places that are not used to political demonstrations.

Moneka Broughton attended a Wednesday night rally in Irvine and said protests like this never would have happened in the city when she was in school in the mid-2000s.

“I haven’t seen anything like this in my 32 years,” Broughton said of the national movement spurred by the death of George Floyd at the hands of Minneapolis police.

They held signs that read, “Civil rights are colorblind” and “Don’t shoot!” while a small band of musicians played soulful music. Passing buses honked in support.

Among those gathered was Michael Gonzales, a 24-year-old delivery driver who had finally managed to make it to a protest on his day off.

Wearing a shirt with the words “Destroy white supremacy,” Gonzales said he’d spent the week posting information on social media about the locations and times of protests so that others could attend even though he could not.

Before coming to L.A. from Covina, he texted a friend who’d expressed some doubt about the Floyd protests. The friend said he felt excluded by the focus on the lives of black people.

“I said, ‘This is their fight right now,’” Gonzales said. “It’s their fight, but it’s for everybody. Police brutality happens to Latinos, Asians too, but right now, it’s about black lives.”

Around 9 a.m., a crowd of several dozen protesters gathered outside the North Hollywood police station. Provvidenza Catalano, 29, stood by a banner inscribed with the words, “End white silence.”

She said it was important for her to acknowledge her privilege as a white person. Over the last week, she’s reached out to friends and others to encourage them to engage in the Floyd protests.

“I see my liberation entwined with black people’s liberation,” she said.

In downtown Los Angeles, more than 100 protesters raised a fist into the air and knelt on the grass of Grand Park for eight minutes and 46 seconds — the amount of time Minneapolis Police Officer Derek Chauvin kept his knee on Floyd’s neck.

Once they rose, they bowed their heads in prayer.

The previous night, while standing in front of hundreds of protesters at the foot of the Irvine Civic Center, Cessa Heard-Johnson raised the bullhorn to her lips and urged the crowd to play a role in the national movement to reform the country’s justice system.

One by one, black community members took turns sharing their stories, each revealing pain, trauma and injustice.

The crowd cheered in unison, chanted and cried together.

Many were in awe that a protest like this could happen in conservative Irvine. Less than 2% of the city’s population is black, and the city’s sheltered nature is commonly referred to as the “Irvine bubble.”

The rally was organized by three teenagers: Ava Hojreh, 19; Ida Nariman, 18; and Alizah Gomez, 18. The women used an Instagram account, @ocforblacklives, to spread the word.

They said the purpose of the peaceful sit-in was to educate communities that didn’t often have to reckon with injustice.

“We wanted to have a productive and educational event,” Hojreh said.